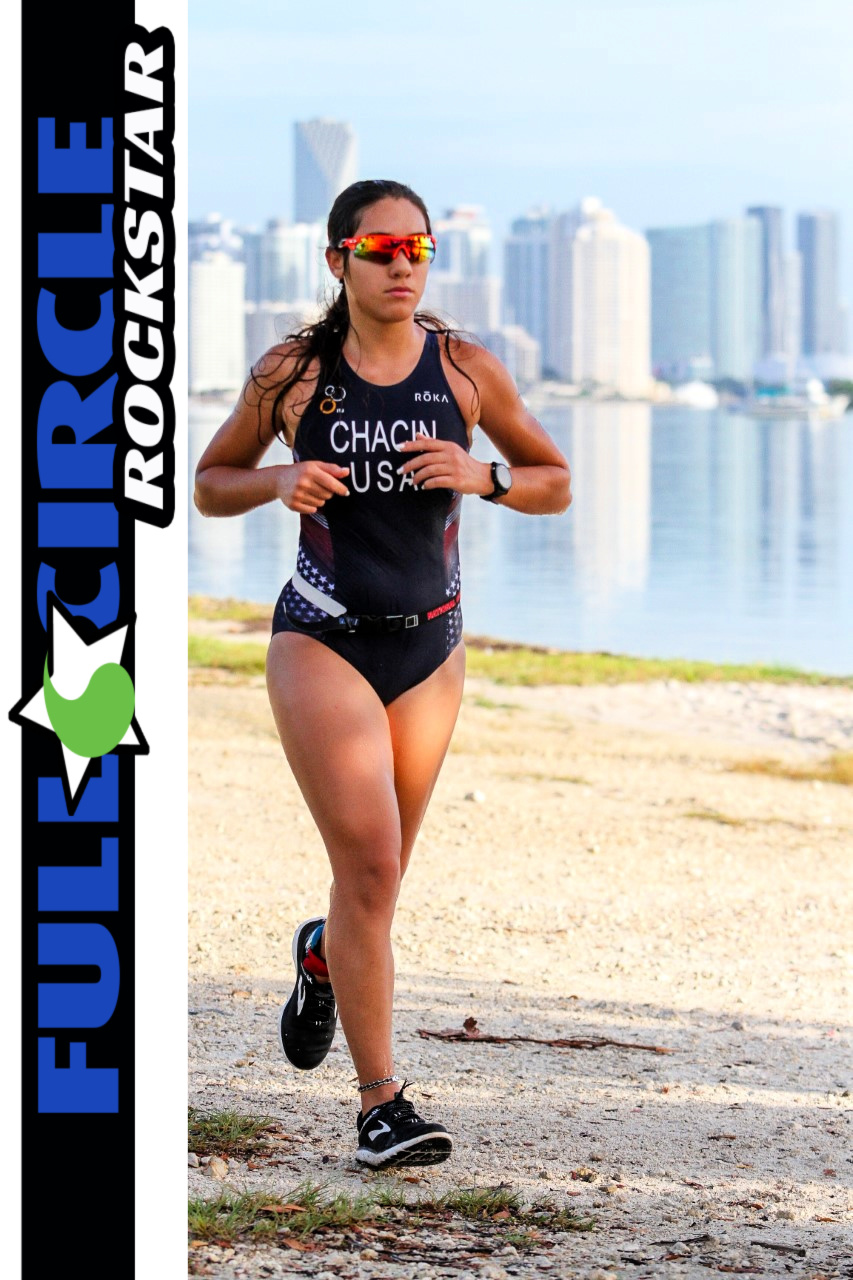 Coaches Notes: Well what can I say, Gaby holds a special place in my heart since I have worked with her in triathlon since she was 7 years old. I am tearing up now thinking of how far she has come and how inspiring she is to everyone on my team. This is has definitely been a TRIBE effort. Everyone on the team looks out for Gaby at practices and supports her so much.

Her determination is unstoppable and when she commits, it is 100%. Having the other coaches Dennis Phipps and Daniela Montiel be able to train with her has also greatly improved her development over the years. I could not be more proud of you Gaby, I love you as my own daughter and know you will make it as far as you set your mind to. Keep believing in yourself and dreaming BIG!!!!!

Profession: Since I am only 15, I don’t have a profession but I do go to school and am in the tenth grade. When I grow older the profession I would like to have is something within the medical field, maybe sports medicine. I also love science and marine biology, anything that involves being outside and in the environment.

Why did you choose FCC to help you on your triathlon/health and wellness journey? Me and Full Circle go way back. When I was seven years old I joined a kids triathlon group that was coached by Erinne and Tachi Llamas. Since that moment, I got hooked. Around three years later, when I was old enough, I officially joined team Full Circle and completed my first sprint triathlon, which was Huntington’s Disease Triathlon Ever since that moment I haven’t stopped doing triathlons. I have actually been working really hard on expanding my athletic career in which Erinne has played an enormous role in helping me form a solid base and not just physically but nutrition wise too. Erinne has been my coach for six years and I’ve known her for nine so at this point it’s more than a coaching relationship, she and Kaia, her daughter have become like family.

What is your “A” race for this season? Coincidentally, I just came back from completing my “A” race which was the ITU World Triathlon Grand Final in Lausanne, Switzerland. Ten months of hard work went into preparing myself for this race and I couldn’t have done it without all of the Full Circle coaches and of course the team. I haven’t really given it much thought of what my next “A” race will be, considering that I just came back from Switzerland a few days ago, but I think my ultimate goal for next season is to focus on all the draft legal series and qualify to go to nationals in Ohio as an elite. I have been wanting to focus and work on this for two years now but with other major events unexpectedly popping up I haven’t been able to.

Please share your BIG goals: For triathlon in general my overall BIG goal is to NEVER quit, or stop doing it. I want to grow old and always apply the principles I’ve learned on how to live a healthy lifestyle through triathlon. Besides that, specifically my BIG goal is to become a professional triathlete like Katie Zaferes. I just want to move farther and farther up, level wise, in triathlon until I become a pro.

Tell me about your successes so far: Besides completing a large of number of races, and always making progress and improving my times in each one, I have attended a few really important races that have gotten me closer to my BIG goal. Starting in 2017, I attended my first ever Youth National Championship, which was my first time competing out of the state of Florida. The following year, I went back and ended up on the podium at Youth Nationals with a 5th place finish. Since that was my last year as a youth, which is ages 7-15, I couldn’t attend the following year unless I qualified to compete among the elites or juniors (ages 16-19). As I mentioned previously, I wasn’t able to attend any of the series qualifiers so I didn’t do nationals the summer of 2019. Instead I unexpectedly qualified for Worlds 2019 on October 13, my birthday, in Sarasota which, in my opinion, has been the best thing that has happened to my athletic career so far and was better than qualifying for nationals.

I’m extremely happy with my results and the way I performed at Worlds considering it was the most challenging race I have ever done and can’t wait for many more successes to come.

What were some of your biggest Improvements in performance for the each of the following? Swim: Bike: Run: Nutrition/Health: Please include any Personal Records and Goals achieved: Over the years I have majorly improved my performance in the sport of triathlon. Every year I make new PR’s and set the bar higher. Although, I feel that in nutrition I have made the biggest improvement of all. I’ve never really eaten unhealthy, I’ve always known the obvious things that you should and shouldn’t eat, but now I know even more and can really say that I know how to lead a healthy lifestyle.

Name 2 or 3 things that have made the biggest difference in your journey:
1. Learning more and more about the importance of proper nutrition before and after a practice or race has been something that has majorly improved my performance.
2. Having really knowledgeable, fun, and determined coaches has really helped me to be successful.3. I think that the most important thing that has really made a difference in my journey and the only reason I’ve gotten this far is because of my parent’s and sister’s support, especially my moms. Without my mom I wouldn’t be where I am today in the sport of triathlon. I would have never gotten this far without her encouragement, support, love, and sacrifice.

What excites you the most about being involved in triathlon? I think the environment of it all is really the most fun part about it all. Releasing energy in the best way possible feels really good. Just being able to compete with people just like me that have a love and passion for the sport is awesome. Traveling to competitions is super exiting too because then I get to know a new place and do what I love at the same time.

What would you say to another person who was on the fence about joining our training program? I would for sure recommend Full Circle Coaching to anyone who wants to join a Triathlon Team. The coaching is really amazing, they are just so dedicated and really focus on getting you to your goal. Also, the amount of knowledge Erinne can give you about racing, nutrition, and mental skills is not something many other coaches can do. Besides the actual coaching and discipline that the group comes with, joining Team FC is like joining one huge family. The friends you make in the group really help you move forward and reach your goals. Joining the team is highly recommendable!!

P.S. This could be you! If you are interested in learning more about Full Circle Coaching, call us at 786-586-6057 today, or click this link to schedule a complimentary triathlon strategy call: http://www.scheduleyou.in/5ZIsVaU

Erinne Guthrie is a USA Triathlon Level II Certified Coach since 1999 and Chief Motivating Officer at Full Circle Coaching, LLC since 2010. She has been training, racing and coaching triathletes since 1997, Member of Team USA and Competed in over 150 races. She is also a CHEK Holistic Lifestyle Coach Level 3, USMS Level 2 Master’s Swim Coach, Metabolic Efficiency Expert and Motivational Speaker, Mom, and much much more.